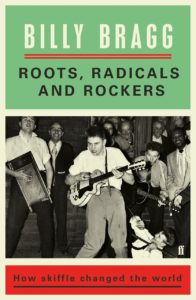 Billy Bragg is one of Britain’s greatest folk poet musicians who came to prominence in the early 1980’s with his own brand of politically charged do it yourself hybrid of folk music, punk attitude and angry poetry. Bragg has always been on the forefront of voicing the hopes and fears of his generation that grew to maturity in the Thatcher years of social deprivation, destruction of industry and class warfare. But also Billy has always been a student of where his music comes from, what influenced him both politically and musically, in particular bringing to life the music of Woody Guthrie to whole new audiences. 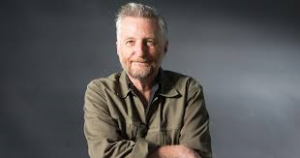 It is perhaps no surprise that Bragg has turned his undoubted writing talents to books on a number of subjects; his most recent being a history of the first rock ‘’n roll ‘craze’ to hit Britain in his book, published by Faber and Faber, Roots, Radicals and Rockers – How Skiffle Changed The World. Bragg writes about this subject with an obvious love, but also great self-awareness of the similarities between the D.I.Y. nature of both skiffle and the punk movement from which he himself emerged.

Bragg draws the many parallels of his years of social and political anger to the period immediately before skiffle became the pervading musical genre; the 1950’s, as Bragg points out in his introduction, were the ‘dead ground’ between the end of the Second World War and the explosion of the Beatles and The Stones, musicians becoming rock stars and teenagers becoming the driving force of pop culture. In the days before obvious and aspirational consumerism Britain still suffered from rationing, repayments of war loans and a greyness into which a group of young people wanted something more. They were a generation seduced by Marlon Brando and James Dean, released from the obligations of National Service, in work with disposable income and determined to rebel. And from the moment they heard Rock Around the Clock by Bill Haley and his Comets, from the moment they saw Sidney Poitier challenge Glenn Ford in Billboard Jungle they knew they had to rebel and that they were going to do that through finding a music of their own.

So it is with some irony, as Bragg points out, that the music they chose was essentially ‘old’ music; the genesis of skiffle being, in 1954, Lonnie Donegan’s recording of Lead Belly’s Rock Island Line; a song about a train driver fooling a toll operator outside of New Orleans. Which is again another irony, as the author points out in the very first paragraph of the book, as ‘the Rock Island Line doesn’t go to New Orleans and there were never any tollgates on American Railroads. And Lead Belly didn’t write that song.’ And even the fact that Donegan himself walked straight out of the trad jazz world as led by ‘evangelistic’ jazzmen such as Ken and Bill Colyer and Chris Barber puts lie to the fact that the music that got the kids interested was anything but new or even original.

What follows in the book, though, are the many reasons why skiffle was so important and why it was new. How it usurped not only the trad jazz world it emerged from but also the dominant force in British popular music of Tin Pan Alley. And the secret to this was the fact that at the moment Lonnie Donegan walked forward in the intervals of Ken Colyer’s Jazzmen to perform these old blues songs the young audiences realised this was something they could do themselves with a minimum of expenditure, experience and equipment.

There are three things that Bragg makes apparent throughout this book. Firstly the importance of this new music in developing a music scene in Britain that directly led from Donegan and contemporaries such as Tommy Steele through the initial meeting of John Lennon, George Harrison and Paul McCartney creating a truly original British voice in the world of popular and rock music, an influence that has been seen throughout the years in punk, art rock, and even through to the 21st century with such do it yourself urban youth movements such as grime and garage. Secondly how it gave the confidence for other musicians of genres such as folk to shout louder about what they were about, with artists such as Ewan MacColl featuring in the clubs built to cater the new skiffle movement. And thirdly, how British artists ‘saved’ American folk music, with the Blues Explosion of the 1960’s referencing artists such as Lead Belly, Willie Dixon and Muddy Waters and bringing them to new audiences.

Bragg’s book is an exhaustive and informative narrative about possibly the most important, invigorating and exciting period in British music, written with great love and knowledge about the subject. He invokes a spirit of what it was like to see these songs performed at the time; how Lonnie Donegan performing Rock Island Line was as incendiary as Elvis performing Heartbreak Hotel, Bowie performing Starman or the first chords of God Save the Queen by The Sex Pistols were. This is an important book in understanding the creation of teen pop culture and is a must read for any student of British music.