Back in the mid 1980’s as I got into music as a teenager, the music that I gravitated to was heavy blues rock music, taking a variety of different routes to develop the tastes I did. It didn’t mark me out as one of the cool kids in school, though those of us who got into metal and rock, with our uniform of patched denim and mullet hairstyles, styled out the ridicule and became a band of brothers. And from our dedication to bands such as Iron Maiden and Def Leppard we found the originators of blues rock such as Led Zeppelin and Jimi Hendrix or the high priests of camp theatrical rock opera such as Queen or Alice Cooper.

It is my suspicion that the brothers Josh, Jake and Sam Kizska along with Danny Wagner, had a very similar musical education to myself and my 80’s friends, with those influences making themselves known in their debut album, as the band Greta Van Fleet, Anthem of the Peaceful Army being, as is it is, a gloriously overblown and bombastic tribute to those great bands of the 1970’s and 1980’s. With an almost Spinal Tap dedication to turning everything up to eleven, the band have put together 10 hard rocking bluesy songs that really does invoke a spirit of serious musicians throwing everything including the kitchen sink at what they’ve produced without seeming to be taking themselves too seriously; they are just four kids having fun listening to their dads old LP records and creating something hugely entertaining and worthwhile. 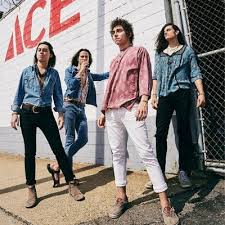 Musically, the band really do gel together, perhaps unsurprising given the fact they are three brothers at the core of the band. But what is most striking is that voice! Josh sounds like the bastard child of Janis Joplin and Robert Plant with just a hint of Geddy Lee of Rush thrown in for good measure; a melodic screacher of a front man, hollering out the songs with a bravado and confidence born of a desire to be the centre of attention. The songs written require a vocal performance and by heavens, they are given it. And that’s the joy of this album. It’s unashamedly brazen, it is over the top, it’s great fun and it’s a worthy throwback to that great 80’s blues rock and metal that so turned me onto music in the first place.