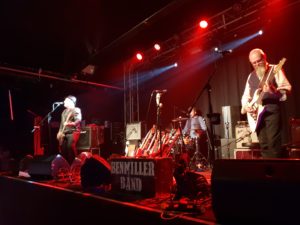 Since reviewing the six track mini album by Anglo-American country rockers The Autumn Saints (see – http://tarkablowpigmusic.com/2018/05/album-review-the-autumn-saints-the-autumn-saints/ ) I have been desperate to experience these brilliant musicians in a live situation. It was therefore with great expectation that I turned up last night to see their support slot, at the Zodiac (I know O2 Academy – but I’m an old Oxford gig goer…) for the Ben Miller Band. And my high levels of expectation were not only reached, but exceeded in a grand style.

The Autumn Saints set was a tour de force of hard driving country rock but with a punk attitude played by three musicians of great and unique skill, working in great harmony together to produce a collection of songs that ebbed and flowed sublimely. And whilst unique, I couldn’t help thinking about ‘supergroups’ of the past; with the thoughts being that the Autumn Saints played in a way that I reckon a ‘supergroup’ of Jack Bruce, John Bonham and Keith Richards might had done had they got together in about 1971 to record a country rock album of superior Americana. Although, to be fair to John Bonham, i’m not sure he would have ever played harmonica at the same time as drumming as Joel Brisk did for the Saints. 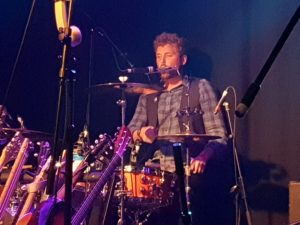 Bassist and singer Britt Strickland grew up in North Carolina, being immersed in a variety of musical influences; blues and country from the south, and from the north the punk and hardcore sounds from places such as DC and New York and this, along with the many varied influences from UK and Europe that firstly made it to America and then, later on as Britt settled over here, runs through the songs the band perform taking country rock in a fresh and new direction. And as brilliant as they are on record, the songs work fabulously in a life situation too. Up tempo, loud (but not to the detriment of quality) and driving, the small crowd were treated to a bravado performance that must have been disconcerting at the very least to the acts that followed. 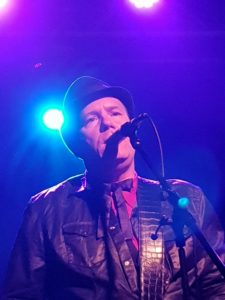 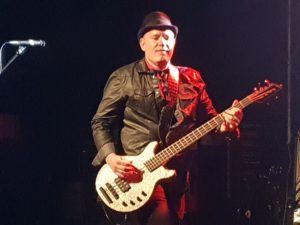 Playing his eight string bass, Britt and Joel on drums, transcended both their instruments as devices of rhythm, to become melodic accompaniments to both Britt’s vocals and also the excellent, understated (but still saying so much) guitar work of David Ireland. In common with my favourite guitarists, like Keith Richards, but also guys like David Gilmour and Mark Knopfler, David has a brilliant understanding of space; he doesn’t need to fill gaps with flashy fret board showing off, his solo’s were moments of minimalist beauty that complimented the performance of himself and the rest of his band mates. 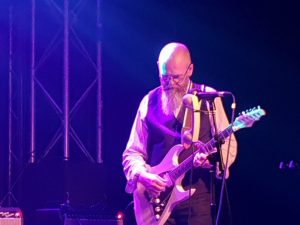 The Autumn Saints are an amazing live band that you should all make the effort to go and see. From their website  http://www.theautumnsaints.com they will be playing at the HOWL festival in Oxford on the 22nd September. Get along if you can – you will not be disappointed. 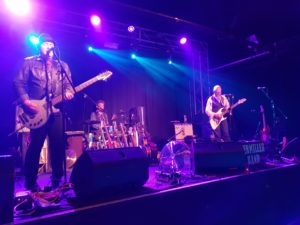