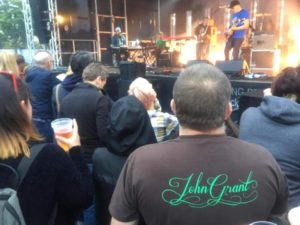 I cannot think of too many acts around at the moment who are anywhere as talented, brilliant and innovative whilst remaining accessible and refreshingly humble as John Grant, who played the Bangor Open House Festival in Northern Ireland a week or so ago. Since appearing on my musical radar with the release of his 2013 album Pale Green Ghosts, Grant has continued to produce and perform great music that never fails to inspire and amaze in equal measure. And with an ability to perform his music in venues both large and small, retaining the ability to perform as if just for you whilst entertaining a crowd of any size, Grant is and has become my standout artist of the last 10 or so years.

First  mention must go to the town of Bangor, a small seaside town 12 miles to the east of Northern Ireland’s capital, Belfast, for putting on such a great festival that has included not only Grant, but also acts of the magnitude of The Waterboys and Public Image Limited. In a small and uniquely intimate setting, supporting local businesses and bringing welcome attention on themselves, they have created something they can truly be proud of. And judging by the performances by Grant, and his support on the evening, the festival will and did bring the best out of the performers themselves. 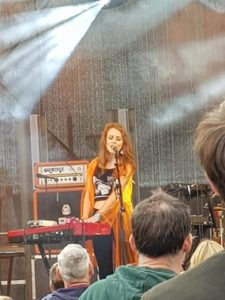 The support on the evening was Hannah Peel, a Northern Irish multi-instrumentalist and singer-songwriter, who has worked and been a member of bands such as The Magnetic North. On this evening, though, she played a short solo set, presenting her exceptional songs accompanied by some very clever electronic accompaniment of loops under pinned by her beautifully ethereal vocal performance. The set culminated with her version of the Northern Soul classic, Tainted Love, backed by her own home made music box, which typified the sheer cleverness of her music that will surely ensure success for her in the future. 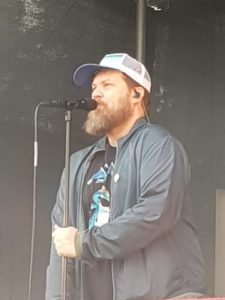 But to John Grant. Now with three solo studio albums to his name and a fourth, Love Is Magic, due for release in October, John has put together a collection of songs that ensure his live performances flow from one great song to the next. And with the crowd, each it seems with a different favourite, enjoying songs of the quality of GMF, Glacier, The Queen of Denmark and No More Tangles, the show was always bound to be good. But to make it great you need something else. First up a great band, which have, with Petur Hallgrissom on guitar, Jacob Smari Magnusson on bass and keyboard player Chris Pemberton, developed with John over the years to become a tight, well oiled unit. The addition of drummer Budgie, of Souixie and The Banshees fame, has added a drive to the band that fits like a glove to those long term band members.

But the main reason John Grant is such a great artist, is John Grant himself. A songwriter of rare ability, he has produced songs that tug at the heart strings and emotions. But that is not enough if the singer cannot present those songs with that same emotion. Grant, though, has no issues here being an artist who is completely believable in his presentation, who wrings, whilst not over doing it, the emotion and meaning out of every song and who allows his audience into his feelings as he songs making each concert he performs an immersive and beautiful event. Grant, in common with many great performers, has the ultimate ability to sing to one person whilst inviting the whole audience to become part of what is a truly gorgeous experience. This Open House performance illustrated that talent with a set that enraptured the audience, taking us through the stories, the heartache and emotions of John Grant’s beautiful and wondrous music.