Through out history the people of Ireland have travelled, sung, drunk, worked and then brought home those experiences to tell stories of daring do, of love found and lost, of tragedy and triumph (though more often than not tragedy) and other prodigious feats of drinking and adventure. And it is often done through the medium of song. In a public house, with more drink flowing and taller tales being told. With all the while a great sense of fun, a joie de vivre, and to use a bit of hackneyed old phrase, the craic.

Fully in this tradition is the duo of accordion and bodhran player Paul Tuthill and guitarist Paul Mitchell, with both Paul’s sharing vocal duties, who’ve released an album, Hotel Connemara, of twelve tunes, played in the traditional Irish style. Hotel Connemara is a fabulously put together record mixing traditional songs, such as Step It Out Mary, with more contemporary pieces such as their brilliant version of Richard Thompson’s Tear Stained Letter. As a compliment, imagine yourself in a smoky bar, perhaps with a wedding breakfast or even a wake going on, somewhere in a back street of Dublin perhaps, with two lads kicking up a storm, inviting all to join in, ensuring that all do. The beers are flowing, the music is banging and a good time, regardless of the occasion will be had by all. 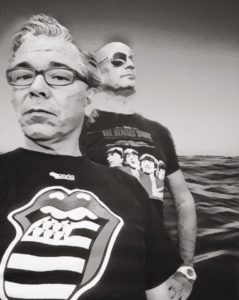 Like the very best purveyors of Irish folk tunes. the Pauls invoke the spirit of the likes of Christy Moore and The Dubliners with their take on the songs that they must have heard at an early age; passed down from older grandparents maybe, or heard in the Irish bars and clubs. But what they do more is keep the spirit alive, keep the tradition going and then take it in a new direction blending in other influences from folk, rock, blues and country music; something that Irish people have always done from travelling through out the world, making their mark, but also bringing home a little bit of where they have been. And in doing so, keep the candle of all types of music burning bright, both with great humour and pathos. Indeed my measure of what makes a great record is one that can, in the space of a few songs, make me laugh, cry, fall in love and sing out loud. Duff Paddy manage to pull this trick off in single songs alone, so a record full of these songs is always going to be a winner.