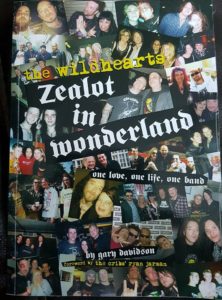 The power of music is a sometimes wondrous thing. It is sometimes a cruel mistress. It can bring the highest joys and ecstasies. It can leave you in a pit of despondency. But it will always move you. It will bookmark the most significant moments in your life. It’ll bring back memories of where exactly you were, who you were with, who you were missing. Hell, it’ll even remind you of what a complete mess you were at a particular time. And as author Gary Davidson points out, in his book Zealot in Wonderland, music is One Love, One Life and for Gary, One Band.

On the face of it, Zealot in Wonderland, is a book about the author’s favourite band, Geordie 1990’s alternative hardcore rock outfit, The Wildhearts, and in particular his love and admiration for lead man, main lyricist and driving force, Ginger Wildheart. And for the Wildheart fan there is plenty of information, knowledge, history and anecdotes within the book to please them, re-kindle old memories and confirm opinions. Davidson has a fantastic recall of album and single issues, important gigs, controversies and band line-ups and changes which he writes about in a clear way, not completely uncritically where required, but with an obvious love for this band and it’s enigmatic front man. 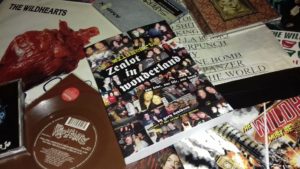 However, Zealot is much, much more than just a fanboy love in. It’s not just a list of significant dates, releases and facts regurgitated for the delight of fellow devotees. This is an extremely moving book that details a descent into depression and mental health issues both of the author and members of the band, not least Ginger himself who has suffered with a bi-polar diagnosis throughout his near 30 year career in music. The author is candid about his own struggles, suicidal thoughts and debilitating depression and how it has affected his relationships, not only with his family, partners and friends, but also the band he loves so much himself. It has been a hard journey; not every release has hit his sweet spot on first listen, not every gig has been a resounding success, not every attempt to get closer to his heroes has ended up as the author hoped and imagined. This book does, however, show that forgiveness is easy to give when there is great love, even if it isn’t always reciprocated. 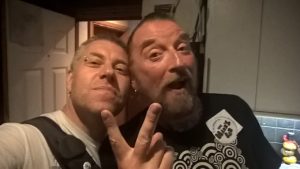 And here is the third aspect of the book; the relationship between hero and fan, between Ginger and Gary. The one thing that gels the book together is the authors quest to sit down man to man with Ginger, to have a one to one interview, to look back over a career that has run parallel with his own life. And mostly, to show Ginger the authors efforts in this appreciation of the Wildhearts and associated acts, with hopefully, if not gratitude, a recognition of what Gary has achieved with this book. And this is where the both the tragedy and success of that achievement lies. It is fair to say that throughout the book Ginger isn’t the most receptive person to Gary; a dismissive conversation outside a gig in Worcester is a significant moment in the whole narrative. In fact, if it wasn’t for the level of love the author shows many other writers would have muttered sod it and moved on. But, and despite the lows that some of the contacts Gary has with his hero, this book has acted as a cathartic aid to his ability to keep moving forward. And that’s the true power of music; if an artiste has worth, if they continually try to create something special (even if it doesn’t always work) then forgiveness can always be found. 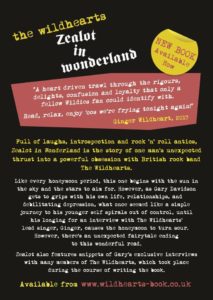 I don’t use the word brave very often, it is too easily bandied about, but in the case of Zealot in Wonderland, it is correct to use here. The author has laid himself bare in telling a story as much about him as the band he so obviously loves. He is open about the struggles that 1 in 4 people have with mental health, and whilst Davidson is at pains to show that the way he deals with things wouldn’t necessarily be the right way for others, he shows hope and a light in his writing that could be a comfort to many. And about the band, Davidson writes with great balance between his love of the band whilst also keeping a critical eye over the works produced. For sure Gary will be more forgiving than the more occasional listener, but this doesn’t affect his writing in any way. But perhaps most pertinently this book also answers the age old question about not meeting heroes; not that you shouldn’t meet them, but do so with a managed level of expectation. However, without the relationship between Gary and Ginger this book might well have ended up being just another run of the mill I went to this gig, bought that record book; Zealot in Wonderland is anything but that. Zealot is a fabulous and entertaining read about one of the most enigmatic front men around and the love for him, his band and his music by one man.

To find out more about Zealot in Wonderland visit http://www.wildhearts-book.co.uk