Regular readers of my posts here on Tarka Blowpig Music will know of my admiration of the singer / songwriter / poet they call the Fish; the artist who was responsible for my enduring 30 year plus love affair with music. So on the day he celebrates his 60th birthday I would like to pay tribute to this artist and wish him many happy returns of the day.

Born on this day in 1958 in Edinburgh, Derek Dick, grew up in Dalkeith where a love of both music and literature grew with influences such as Joni Mitchell, The Sensational Alex Harvey Band and Yes in music and the poetry and prose of writers such as Jack Kerouac and Dylan Thomas. All of these influences can often be seen in the output of the band, Marillion, that he joined in 1981 and in his later solo work. Indeed, the fourth and last album, Clutching at Straws, which celebrates its 30th anniversary, leans heavily on both Kerouac and Thomas in its lyrics and the Mark Wilkinson designed cover art work.

Derek spent a few years after leaving school in a number of jobs including working in forestry before in 1981 moving south and teaming up with Steve Rotherey, Mick Pointer, Brian Jelliman and Doug Irvine in Marillion. Derek supposedly impressed the band with his vocal similarities to the lead singer of Yes, Jon Anderson. It was also at this time that Derek took on the nickname Fish; legend having it that he spent in inordinate time in the bath in his digs, giving the impression that he was as much a water borne creature as human.

Over the next two years Marillion went through a number of personnel changes and developments before releasing their debut album, Script for a Jester’s Tear, in March 1983. This album, with its stand out single Garden Party, announced the band on a national stage with radio play on the Radio One rock show championed by the likes of Tommy Vance bringing them to the attention of one 11 year old lad about to start secondary school in Abingdon, Oxfordshire. Their live performances were already legendary, especially with the big 6ft 5 greasepaint wearing front man, developing the performing skills that catapulted Marillion to being one of the best stadium rock groups of the 1980’s. A second album, Fugazi, quickly followed before, in June 1985, the massive 3rd album, Misplaced Childhood, featuring the top 40 singles Lavender, Heart of Lothian and the number 3 hit, Kayleigh, cemented their place in the pantheon of rock gods. 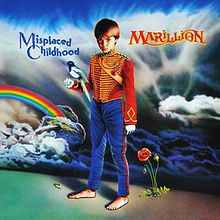 At this point, to my mind, the band could do no wrong and so it was with great expectation that we waited for the fourth album, Clutching at Straws, which was released in 1988. This album truly showed off the poetic lyrical genius of Fish with songs of loss, loneliness, despair and regret that resonated with me as a sixteen year old whose musical education seemingly developed on a parallel with my favourite band. So it was with huge shock and sorrow that we awoke to read the news, probably via Kerrang or Metal Hammer magazine, that Fish and Marillion split up after this album. To a still maturing adolescent boy it was devastating news, news that took me a long, long while to get over (some of you who know my aversion to the ‘new’ singer of Marillion, could, with very good reason, say I haven’t developed emotionally on this subject in the last 30 years either!)  Suffice it to say 1988, musically, was an annus horribilus for me.

In 1990, though, Fish returned with a solo album, Vigil In A Wilderness of Mirrors, which again showcased his lyrically ability. Backed by musicians of the calibre of drummer Mark Brzezicki, guitarists Frank Usher, Hal Lindes and Janick Gers and keyboardist Mickey Simmonds, Vigil has supplied a number of songs, such as Big Wedge, Cliche and the concert ending sing and dance along fan pleaser, The Company. Whilst perhaps not the commercial success that both EMI, the recording company that held Fish’s rights at that time until a protracted legal dispute was settled, and Fish himself expected, it still enabled Fish to take with him fans of Marillion in his solo direction. Indeed, The Company of Fish fans, which, as the song says, is ‘ solidly singular,’ have supported the big man through the years and the release of albums such as Internal Exile, Field of Crows, 13th Star right up to his last album, Feast of Consequences. Live, Fish has lost none of the magnetism that characterised his early performances with Marillion, especially with in recent years anniversary tours of Misplaced Childhood and now the 30th anniversary of Clutching at Straws which he will be bringing to gig venues through out Europe this autumn after a number of festivals this summer including a return to Cropredy for Fairport Convention’s annual reunion.

At present Fish is working, along with Robin Boult and Steve Vantsis, on his next and final album, titled Weltschmerz, which will tackle his thoughts and feelings of world weariness before he leaves the music business once and for all. Though I’m sure Derek has plenty of ideas to keep himself busy. I certainly hope he’ll get down to producing some writings, whether about his life or perhaps development of his undoubted ability to tell amazing stories. There may well be some more acting, something he has done through out his career with performances in such work as ‘The Young Person’s Guide to Being A Rock Star’ as well as more recently the role of Uncle Jimmy in the small budget crime thriller comic book caper ‘Electric Man.’ Hopefully we might get some more radio work; his award winning programmes for Planet Rock on progressive music were completely brilliant. Or he may just devote more time to his garden in the Borders of Scotland and his wife Simone, who he married last year.

One thing they always say is that you should never meet your heroes. I have, however, been lucky in the heroes of mine that I have met turning about to be proper lovely people; whether that be playing cricket with Richard Thompson or spending time, as I once did with Derek in a London pub, chatting about Scottish formula one drivers of the late 1960’s and 70’s. What I can say about Derek is that he is an engaging, witty and intelligent person who, as the persona of Fish, has created music and poetry of the highest standard, art that has bookmarked much of my life since I first heard Garden Party back in the early 1980’s. It has always been an experience of immense spirituality when experiencing his live performances, whether that be in a small intimate club such as the Dolly in Oxford, a huge outdoor event like Marillion’s Garden Party or at one of his fabulous conventions where the Company get together to dance like ballerina’s and sing like Russian sailors. Here’s wishing Derek a very happy 60th birthday; congratulations for maintaining the lifestyle and doubling 30!