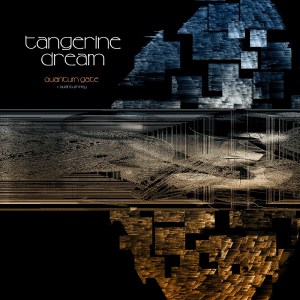 In 2015 German Electronica visionary and leader of the band Tangerine Dream, Edgar Froese, died, two years before the band celebrated its 50th anniversary. However, Froese had elected as his successor as leader of the band, Thorsten Quaseschning, who, along with Frose’s wife, Bianca Acquaye and other members Hoshiko Yamane and Ulrich Schnauss, have continued to work as the band.   The result of this work is the album released as Quantum Gate which was released in September 2017. 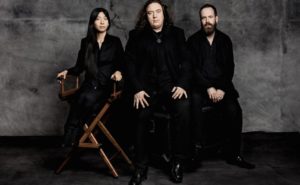 In line with Froese’s vision the album has now been re-released with the edition of the earlier Quantum Key E.P. as a two volume edition. The release continues and develops Froese’s and the bands traditional and trademark sound, featuring sequence-driven electronica  to bring to the listener atmospheric moods that envelop and wash over them; taking them on a journey of aural exploration.
When I was very young, during the white heat of space exploration of the early 1970’s, through the films we saw of moon exploration, the space lab and unmanned journeys to Mars and further planets I was taken to the London Planetarium. I remember being awe inspired by the opening up of the mysteries of the universe as stars and constellations were lit up all soundscaped by futuristic music that seemed somewhat other-worldly. Listening to these two pieces of art, took me back to that time of wonder, evocative as it is of quantum physics and exploration.
The music has a kaleidoscopic quality to it, the sounds washing over you in waves, as visions of colours and shapes are suggested to the listener. It is clever music that, despite its lofty scientific ambitions. still does work on a level of just being able to listen as a piece of wonderfully crafted and melodic tunes. It is music that’s leads the listener into rooms of opened perception, whilst challenging preconceived ideas of realities. It is a fitting tribute to Edgar Froese’s vision for Tangerine Dream whilst ensuring the band can move on and forwards with its founders aims and desires at the forefront.