Album Review: The Euphoric – The Fierce And The Dead 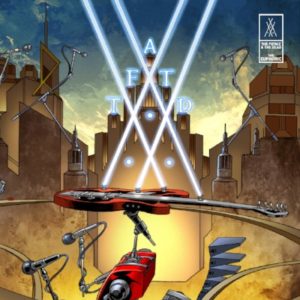 Just recently I have picked up on the Channel Four series of Philip K.Dick stories, Electric Dreams, in which dystopian nightmares are played out in mainly normal humdrum situations with a fear of foreboding dread building to a crescendo. Likewise, the third studio album from instrumental band The Fierce and The Dead, titled The Euphoric, is one that builds and builds, working around a juxtaposition of beautifully crafted melodies driven by crashing, hard driven and downtuned guitar riffs. A major compliment I can pay the album is that should channel four make another series of Electric Dreams this is the band and album that should soundtrack it.

Over the last eight years since their debut release, the Part 1 EP, The Fierce and The Dead have developed their craft, adding layering and texture to their already formidable playing and production skills. Using their influences whilst retaining their individuality is an enviable skill; one which is often not pulled off but, in the case of this album, most certainly is. You can hear throughout the album the influences of the musicians the band have worked with or obviously admire; from the hardcore metal of bands such as Slayer to the melodic tune creation of a Steven Wilson, The Fierce and The Dead have made an album of deep complexity whilst retaining a simplicity within the riff structure that drives the album on and doesn’t allow it to become samey or repetitive.

The two lead singles from the album are both standouts with the already successful, with accompanying video by acclaimed director Mark Duffy, Truck being followed by, on the 30th March, 1991. Both tracks show off the sound which you can expect from the album with their heavy psychedelia and cross over between guitars and synths being indicative of the direction the band have taken. The band are happy to confound, confuse and surprise in composition and performance which makes this album a fulfilling and satisfying listen.

The album, which is released on the 18th May by Bad Elephant Records, featuring amazing cover art work by Mark Buckingham, will be available in both CD and Vinyl formats. There will also be available limited edition bundles featuring a print of the cover artwork and an exclusive bonus CD of live and demo tracks.